A huge congratulations to John Miller who recently celebrated his 35th anniversary at OGL.

John looks back on the last 35 years:

“One cold and grey November day way back in 1986 I applied for a job at OGL. I had arrived in the UK some 6 months earlier from South Africa which had a far warmer climate. In those days OGL was much smaller so I had the privilege of the managing director, Paul Byrne, interviewing me. As should be obvious at this point, I got the job. Thus began my long and varied career at OGL, or as it was then, Oliquip. Not only did I take on ever changing roles but I worked from multiple sites as in those days OGL tended to move premises on a regular basis.

“I started my career in the Technical department but within a relatively short time moved to Oliquip Instruments which designed and installed traffic light monitoring systems. It was during this period that I became the first person at the company to be issued a mobile phone or very large brick in those days. If I recall, I spent 2 years doing this and then moved back to the Technical department working on the help desk, field service, cabling and installations. After this, I then spent a couple of years working within the Software department providing support for Linux systems before moving back to Technical.

“Somewhere along the line I was seconded into the Sales department to supply temporary cover due to a member of staff being off work. This temporary role turned out to be more of a permanent position. I had chance to become a pre-sales consultant for the Sales department and could re-hone my technical skills.

“Some time after, CyberGuard was born. Always having had an interest in cyber security from both a defender and attacker view point, I made it my mission to move across. I now spend my days certifying and trying to educate our clients.

“What I have learnt over the years at OGL is there is always the opportunity to change career paths as long as you have the want and are willing to obtain the necessary skills.” 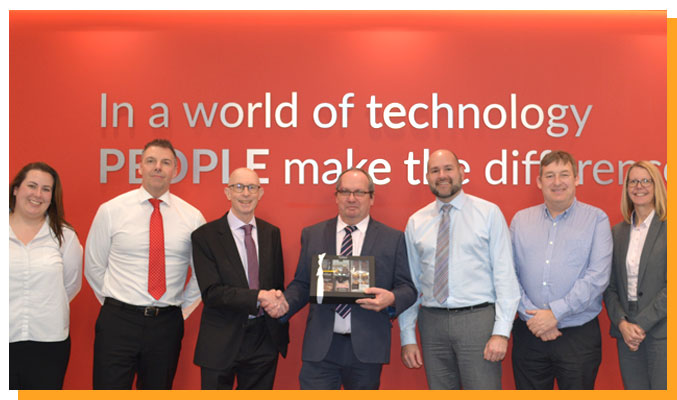 Sean Tickle, John’s manager, congratulates him on his 35 years at OGL:

“I first met John in the height of lockdown and from day one it was evident that he knew his job and OGL exceptionally well. His ability to deliver a high standard of service to customers has been constant and that’s shown in, not only how successful CyberGuard’s InfoSec Consultancy team has been but also the positive feedback I receive from customers. One customer once said:

“We know we’re going to pass our Cyber Essentials Certificate, we just want to see John!”

“Which is not something I’ve ever seen in consultancy that revolves around implementing security controls!

“Ultimately, I can see why John is receiving this award. His dedication to his job and the CyberGuard organisation, his ability to help customers on their cyber security journey and how he is able to spearhead new initiatives such as ISO 27001 auditing and implementation makes him a credit to the group as a whole and very much to CyberGuard specifically.

“Ranging from his positions in sales and other departments to becoming our go-to source for information security expertise it has been a pleasure to work with John and I am very much looking forward to continuing to work with him in the future.”