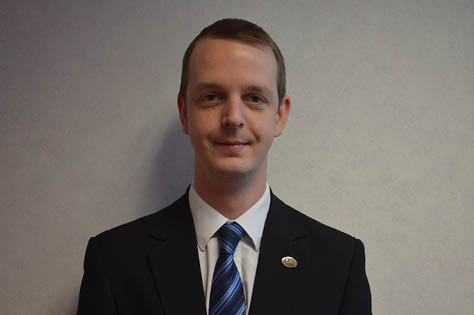 A huge congratulations to Mike Parton who is the latest member of staff to join the Long Service Club having recently celebrated his 15th anniversary at OGL. Mike was presented with an Amazon eVoucher, engraved glass trophy and engraved pen from Neil Morris on behalf of all the Directors.

Mike looks back on the last 15 years:

“When I re-joined OGL in 2006, after previously working for OGL for 2 years, I worked as a Field Support Engineer until I was persuaded to join the Installations team.  15 years on and I am still working in the same great team along with several of the engineers such as Shin and Mark who have been with the team longer than I have.

“During my time with the team I have progressed from a Desktop Installations Engineer to a Senior Technical Implementations Engineer.  I have lost count of how many server and WatchGuard installations I have carried out to date.

“Over the last 15 years I have made a lot of good friends at OGL and enjoy working alongside a great bunch of people.  There have been a lot of good memories including the stressful work of closing Gloucester Airport and runway for two hours to carry out server upgrades.  I have also been lucky enough to go on a trip to Croatia for a WatchGuard Partner Conference in the olden days when we could freely travel.”

Rachel Seagrove, Mike’s manager, congratulates him on his 15 years at OGL:

“Mike is a well-respected member of not only the Planned Services team but the whole Technical department. Everyone always comments on how friendly and helpful he is, how he always does everything with a smile and never complains. Can’t believe it’s been 15 years though Mike, did you start at OGL when you were 15? I personally am looking forward to working with Mike in the Planned Services team over the coming months. Congratulations on your OGL birthday and here’s to the next 15 years.”