A huge congratulations to Tim Crew who is the latest member of staff to join the Long Service Club having recently celebrated his 5th anniversary at OGL.

Tim looks back on the last 5 years:

“I was introduced to OGL back in 2016 by Lee Jones and Luke Nicholls, who were also studying a HND in Computing, of an evening at the Dudley College of Technology.  The evening courses would run from 18:00 – 21:00 pretty much straight after a day’s work at OGL, so it was a long day to say the least!

“I began as a 1st Line Engineer back when 1st Line was an independent team rather than being incorporated into the teams. I had the oppourtunity to work alongside other long serving engineers.  Shortly after, the 1st Line Engineers were then separated into the individual teams where I became an engineer for the TMA/Enterprise Team.  This allowed me to build a more personal relationship with the customers and adjust to their individual setups ensuring issues are resolved efficiently.

“Within 12 months, the TMA/Enterprise team then split into two teams where I became a 2nd Line Engineer for the Special Accounts Team (now known as Enterprise Managed Services Team).  I progressed from a 2nd Line to 3rd Line Engineer on EMS which is where I spent most of my engineering career, assisting some of the larger customers.

“In August 2021, I was promoted to Technical Lead for the TMA/Enterprise Team.  There were a lot of customers I have had previous dealings with, but other new customers which I was keen to get involved with.  Looking back, I can’t believe where the last five years have gone!

“My favourite aspect of working at OGL is the constant career opportunities within the business.  I have witnessed not only the Technical Service Desk grow over the years but the CyberGuard department as well.

“My biggest achievement is my career progression.  I am proud to be a part of the Technical Service Desk and feel the support from my colleagues and managers has helped me to get to where I am today as a Technical Lead. 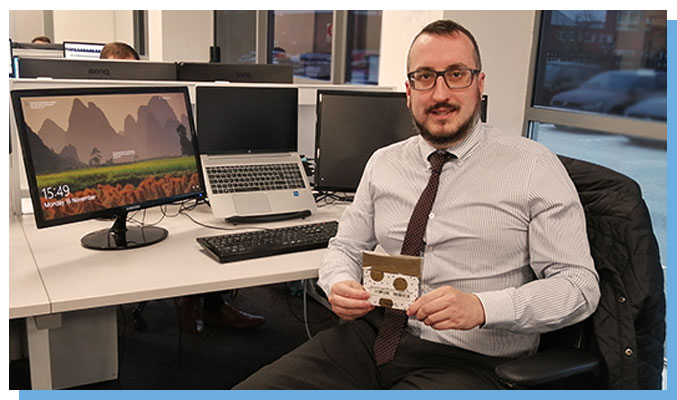 Robert, Tim’s manager, congratulates him on his 5 years at OGL:

“Tim has been with the company for 5 years now, but I have only had the pleasure of working closely with him since July this year when he was promoted to the Technical Lead of the Enterprise Team.  In that time, he has adapted quickly to supporting the engineers in the most effective way possible through what has been a very challenging 4 months.  In the short space of time on the team Tim has also managed to build up a strong relationship with some of our key customers by ensuring that major issues are handled efficiently whilst ensuring the customer is kept fully informed on the progress with clear and regular communication on any progress.

• “Tim’s value and impact on the team in the short space of time he has been with us can also be shown by some of the comments from his team members below:

• “I think he has settled in (to his new team) really well and is always willing to help out with calls where possible to help the team (especially us 3rd liners), and he’s always on hand to help when needed”

• “Tim is a huge asset not only to the Enterprise Team but the company; his value is recognised both internally by his colleagues and by our external customers from the support that he provides to both.

• “I would like to take this opportunity to thank Tim for all his hard work and dedication to developing the engineers on the team, I look forward to congratulating him on 25 years’ service in the future. ”