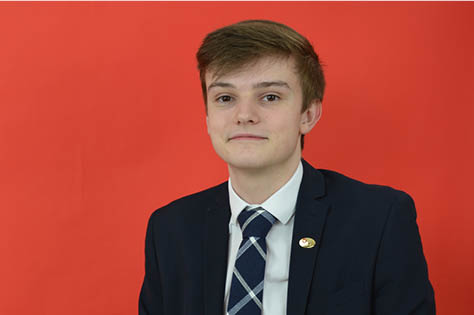 A huge congratulations to Alex Rose who is the latest member of staff to join the Long Service Club having recently celebrated his 5th anniversary at OGL. Alex was presented with an Amazon eVoucher from Emma Porter on behalf of all the Directors.

Alex looks back on the last 5 years:

“I started at OGL as a software apprentice in the prof.ITplus Support team back in October 2016, straight after finishing school. Having just left school, there were quite a few aspects I didn’t understand at the beginning; when I started, I didn’t know what an invoice was, and the thought of the nominal ledger hurt my brain! I finished my apprenticeship after a year and became a full-time 1st line support advisor. I also started my AAT qualifications, which were paid for by OGL, and they allowed me to study during set times in the week. After another year I moved onto become a 2nd line support consultant. 2 years later I was asked to be the first member of the Profit4 team, which is where I am today.

“My favourite part of the job is the customers – we have such a good customer base, and they are all a joy to talk to. We have also started playing football against one of our customers, which shows what a good relationship we have built with them over a short period of time. I also love the Profit4 team: a group of people who are always willing to help and lend a hand.

“In terms of achievements, the one I am most proud of is starting as an apprentice at 16 years of age and working hard to be in the position I am today. I am very grateful for a lot of people though, especially from my early days at OGL, such as Charlie Grant, Sharon Moreno, Emma Porter etc, as I don’t think I would have lasted the 5 years without them!"

Colin Stephens, Alex’s manager, congratulates him on his 5 years at OGL:

“Whether it’s the market trader gift of the gab, or his fantastic ability to make pretty much anyone chuckle, everyone remembers meeting Alex Rose.

“Profit4 Support is a department which prides itself on being responsive, adaptive and proactive in our quest to always be the lifeline that our customer base depend on.

“His work ethic gives a fantastic summary of the character that Alex Rose is.  Alex never tackles any challenge with less than 110% effort.  He goes above and beyond in every task that is asked of him and our customers love him for it.  His calm approach to even the most complicated of support incidents is testament to his ability to organise and breakdown a problem into its core components to identify a working solution to the problem.

“Alex is held in the highest esteem by all who work alongside him and I personally value Alex’s input, opinion and support on every situation we deal with as a team. Alex has a bright future ahead of him and I look forward to seeing him flourish over many more years with OGL.

“Alex, you are one in a million, and dare I say “The Guru” of Profit4 Support.  Congratulations on your 5 year anniversary at OGL from myself and all the P4 team.”