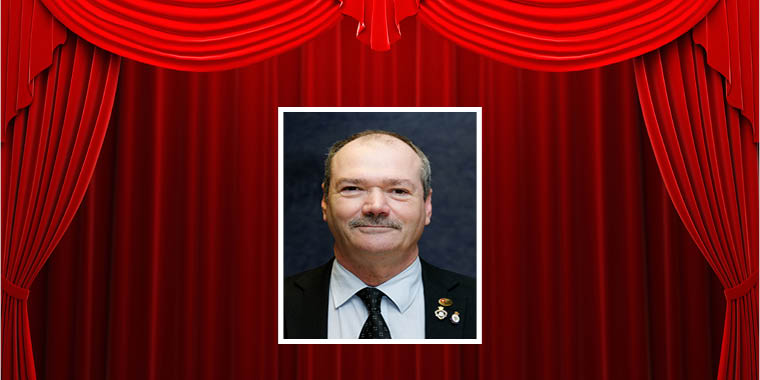 A huge congratulations to Mick Hood who is the latest member of staff to join our Long Service Club having recently celebrated his 25th anniversary at OGL. Mick was presented with an Amazon eVoucher, engraved glass trophy and UK weekend break for two from Commercial Director, Neil Morris, on behalf of all the Directors.

Mick looks back on the last 25 years:

“When I first came to OGL the role was as a Consultant, acting as a “go-between” for Finisher Customers and the Finisher Development Team headed by Andrew Davies.  I did not apply for the job but was approached by the company with a phone call (having applied 2 years previously for another role), asking if I could come for an interview at 5pm that day. There was a little surprise when I said I would not be able to get there for that time as I was actually in Eindhoven working with Dutch customs and Walsall at the time.  I had my interview with Paul Byrne and was immediately impressed when I pointed out that I thought I may be too old for him to employ at 39 and he stated that he was older than me and did not consider himself to be too old.  So I started my role as a consultant and then found myself in the small Finisher team installing, enhancing and generally doing all-round jobs within the team.  I did point out to Neil at that time that I did not want to be involved in any programming as I hated this aspect of the computer business.  Little did I know what was to come.  Eventually, the Finisher team became redundant as the package was not progressed beyond the prof.IT version, so I was amalgamated into the Software Support team where I have been since.  I now support all of the Finisher sites we have left aided by Sue Bullock when necessary (quite often) and also support all versions of our software up to and including our new Profit4.  I came to OGL from a military career of 19 years, leaving the Army as a Sergeant Major in the Infantry, and in the last 4 years of that career I found myself in an IT role teaching users and designing stationery which I found to be very interesting. I seem to have taken the stationery role forward here and spend a great deal of my time creating stationery for end users.

“I have enjoyed the last 25 years with OGL; it is the longest I have been in any position and there have been some sad times and some happy times, but all have been made bearable by the personnel working within the company, many of whom I consider to be friends, and some even token wives: car wife, work wife and shop wife (those colleagues will understand).  Suffice to say I enjoy what I do – I like fixing things and making customers happy with the end result of what we all do."

Charlie Grant, Mick’s manager, congratulates him on his 25 years at OGL:

“Mick has worked and supported pretty much every Software product, starting with the text based Profit and Finisher systems and then moving to the more modern prof.ITplus systems. He’s had a hand in supporting ROAD, Stationery, SalesVision and WMS along the way just for good measures!

“I’ve personally worked with Mick for 14 years. I remember when I started and Mick showed me how to work on the dreaded VSIFAX stationery, the bane of many peoples lives back then, but he was calm and made it clear what I needed to do. He made me feel at ease and this dreaded task wasn’t actually so bad after all; he may not have realised it but he gained my instant respect from that very moment. I know there will be many others around the company that will have shared similar experiences working with Mick and share my thanks for the support he has given.

“I would like to say a huge thanks and congratulations to Mick for all his hard work and efforts over the years and for reaching his 25 year work anniversary. He has taught me and many others a great deal and I know he will continue to do so for many years to come!”