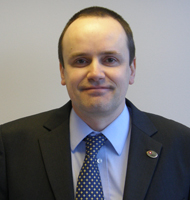 A huge congratulations to Richard Noall who is the latest member of staff to join the Long Service Club having recently celebrated his 10th anniversary at OGL. Richard was presented with an Amazon eVoucher and engraved glass trophy from Neil Morris on behalf of all the Directors.

Richard looks back on the last 10 years:

"I joined as a Server Engineer in Planned Services, then became a Senior Server Engineer, then Consultant; there was a brief stint in the Hosted team in between.

"My favourite aspect of the job is meeting all the different customers (during non-Covid times) and generally being part of a really good team of people in Planned Services.

"Generally, my biggest achievement is working on the bigger projects and achieving a satisfactory conclusion to them (well, most of them!)

"There was the time I accidentally deployed Kaspersky anti-virus to all of our managed customers. That’s one I try to forget. Or taking a customer’s house keys home with me and having to drive back 50 miles to return them at 9pm."

Lance Hogan, Richard's manager, congratulates him on his 10 years at OGL:

"Richard has been at OGL for 10 years and in that time, he has been such a valuable member of Planned Services and the company.

"Richard always strives to do the best he can and in doing that, he always offers an extremely high level of customer service. The solutions that Richard delivers to customers are very advanced but this never phases Richard and he always delivers.

"It is a great privilege to have Richard in the team as one of the Senior Members."